For those of you who are lazy to download files form China with 5Kbs speed.
Spreadtrum ResearchDownload User Guide [v1.0.2][2011][EN]
Original source (slow).

There is an image Fig 3.6 in a book "Viewpoints" [1] which explains one-point perspective. An observer looks at a box (B1,B2,B3,B4) and the box projects to an image plane containing points V1 and V2. It is a one-point perspective because the close side of the box (B1,B4) is parallel to the image plane. The observer looks in OZ direction and OZ is parallel to (B4,B3). Hence V1 is the vanishing point for line (B4,B3). (O,V2) is parallel to the box's diagonal and hence V2 is the vanishing point for the line (B4,B2). 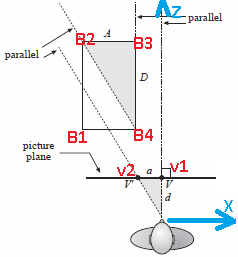 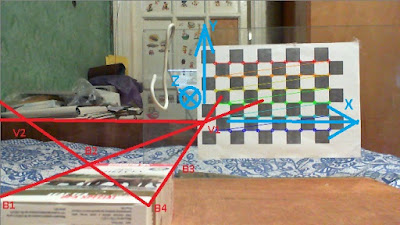 In this post I am interested in triangulation, - the technique of inferring the 3D position of an object from two images of this object, taken from different viewpoints. The technique relies on the ability to find corresponding 2D points in two images. In this sense the triangulation is a 'poor man's' 3D location estimator.
2D point correspondence + Triangulation -> 3D location
The initial set up is below.